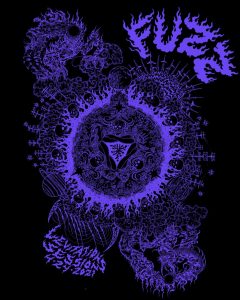 Next up on Levitation Sessions: FUZZ! The heavy psych power trio bring a full set spanning their discography and recorded at Zebulon in Los Angeles.

FUZZ is Charles Moothart, Ty Segall and Chad Ubovich. In Oct 2020 the band released their first album in 5 years, III, scorching the earth with pure primitive rock and roll mastery captured by the sonic guru Steve Albini. It’s a record that is meant to be heard and experienced live, and their Levitation Sessions set is the smoldering slab of rock and roll we’ve all been waiting for. The show is heralded by artwork created by Tatiana Kartomten, capturing the dark and intricate energy of the band’s set.